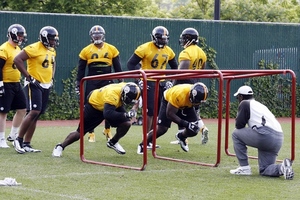 We’ve seen a few storylines emerge as the Steelers powered through the first week of Phase 3 OTAs. Some good things, some bad things, and a lot to look forward to starting with the next set of three OTA sessions beginning May 29.

The conversion of David Johnson to fullback and his subsequent battle with rookie UDFA Will Johnson, the Workout Warrior of West Virginia, is something that may heat up quickly from minicamp straight to training camp.

It’s hard not to love Will Johnson’s attitude. After having gone undrafted in 2011, and the lockout-induced chaos the league went through, he wasn’t able to land on a roster. The Steelers signed him after a workout they watched in March. His strength, size and speed could give him an advantage over the athletically limited David Johnson, but his lack of experience will hinder him this year.

David Johnson has positional flexibility over Will Johnson. He’s heavier, and is going to be the more polished blocker of the two from an inline perspective. David Johnson gives the Steelers all three positions – fullback, H-back and tight end.

The Steelers’ running back corps will be deep this year, and the current group they have (Rashard Mendenhall, Chris Rainey, Isaac Redman, Jonathan Dwyer, John Clay and Baron Batch) aren’t all going to make the team, especially with the alleged intention to keep a fullback on the roster.

Even the release of a tight end upon TE Weslye Saunders’ return to the lineup after Week 4 doesn’t seem to benefit the backs. Mendenhall is rehabbing but doesn’t appear to be near a return (read: after Week 1 at the earliest). Redman will continue filling in as the feature back, something he’s looking forward to, per the Erie Times-News.

Also mentioned in that article was rookie Chris Rainey flying down the sideline to haul in a “rainbow” pass from QB Ben Roethlisberger. RB fly patterns…remember that.

Gilbert has no intentions of letting go of left tackle spot

The Steelers prepared this offseason with Marcus Gilbert penciled in at left tackle. That changed as soon as they selected Mike Adams in the second round. But Gilbert got the benefit of playing on the left side while Adams’ college class finished up their course work this past week.

Adams is said to be given the first crack at it, but with veterans Jonathan Scott and Trai Essex waiting in the wings should he falter, it seems Gilbert is pretty much a certainty to start on the right side.

We’ve heard from Keenan Lewis and we’ve written on Cortez Allen. Lewis has Pro Bowl aspirations after putting his time in the Steelers’ system. Allen is physically gifted and probably well ahead of schedule in his second year. What about Brown? He figures to be a lock for special teams stardom this year, and, due to him being arguably the best athlete of his cornerback brethren, still could surprise in training camp. His progress from Year 1 to Year 2 will be intriguing to watch, to say the least.

Roethlisberger’s grasp of the offense

For whatever he says, Roethlisberger is a seasoned professional, and he’ll eventually understand the Rosetta Stone. While it may be better overall for him to stop lofting softballs at the media and at least try to mention something he likes about the offense, what matters is his preparation on the field.

Whether it’s him griping about a lack of perceived deeper pass opportunities, or him feeling like he’s being targeted for the team’s offensive slump in 2011, he has ample opportunity to learn the offense (doesn’t have to be done in one day, mind you) and be the same highly productive player he is.

Maybe he’s just letting off steam. We’ll give him that, and hope he continues to do whatever he needs to do to enable him to lead this offense.

Get your Steelers Fathead!