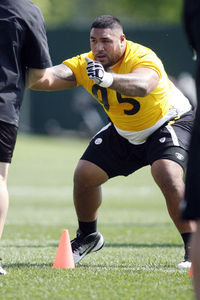 Call him The Coliseum.

Alameda Ta’amu signed a four-year rookie contract with the Steelers, the team reported Sunday. His size inspires the nickname – a play off Oakland’s Alameda County Coliseum – but his ability led the Steelers to trade up with Washington in the fourth round to take the Washington Huskies product.

Ta’amu will compete with third-year man Steve McLendon for playing time this season, as both of them will look to fill in for Steelers NT Casey Hampton, who is recovering from a torn ACL suffered in the playoffs.

The first of our draft picks has signed, Fourth Round pick Alameda Ta’amu has agreed to a 4yr contract.

Nose tackle was a position of need for the Steelers in the 2012 NFL Draft, and moved up nicely to grab Ta’amu, a 345-pound run-stuffer who projects to play at the zero technique for Pittsburgh.

Ta’amu is a project kind of player but has big upside. Learning under defensive line coach Johnny Mitchell, Ta’amu could compete for a starting position by his second year.