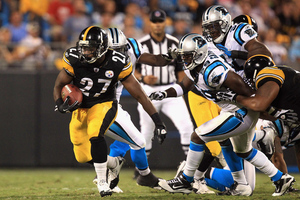 Mike Wilkening of Pro Football Weekly penned a solid piece on Steelers RB Jonathan Dwyer, and what he’s up to this off-season.

From Wilkening’s accounts, Dwyer is ready to compete for an increase in playing time, something he hasn’t had much of since being chosen six picks before Pro Bowl WR/KR Antonio Brown.

Entering his third NFL campaign, “you want more,” Dwyer said Thursday. “You want to be out (there) more and more and be one of the main guys that contributes on this team.”

The article also references RB Rashard Mendenhall, whom Dwyer noted was at the facility as part of his rehabilitation from an ACL tear he suffered at the end of last season.

Dwyer won’t likely compete for a starting position this year, but as he can attest to (a broken foot toward the end of the year) as well as a late-season injury to former Steelers RB Mewelde Moore, having a deep running back unit is important in the NFL.

He showed at least some potential, having scampered for a 76-yard run against Tennessee in Week 5 last season – the seventh-longest play from scrimmage in team history.

Running back figures to be a hot battle in training camp, with back-up spots behind likely starter Isaac Redman and fill-in spots while Mendenhall is out (could be through the first part of the season) are up between Dwyer, John Clay, Baron Batch and rookie Chris Rainey.