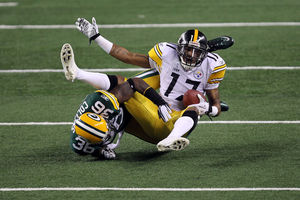 ESPN’s Adam Schefter reported on ESPN Radio as well as his own tweet Sunday morning Steelers WR Mike Wallace indicated to more than one person within the Steelers organization he won’t sign his tender offer from the Steelers “until he has to.”

This isn’t exactly surprising (we mentioned the likelihood of him not signing it for a while). He has until June 15 to sign his tender before the Steelers can reduce the one-year contract from $ 2.7 million to $ 577,500.

Steelers WR Mike Wallace told some within Steelers organization that he does not plan to sign his first-round tender “until he has to”.

The report suggests, then, Wallace would wait until then to sign it, and it’s really nothing more than a negotiating tactic. If he signed the tender now, the Steelers wouldn’t have any particular reason on the surface to negotiate any further. In other words, if Wallace wants more than $ 2.7 million this season, it’s not in his best interest to lock himself in now, when he still has roughly two months to continue to work toward a long-term deal – something both sides have said they want.

If he holds true to that, it would mean he wouldn’t be under contract during the Steelers’ designated Organized Team Activities – OTAs – which go from May 22 to June 14. It isn’t likely he would attend these voluntary activities if he isn’t under contract.

How big of a deal it will be for him to not be in attendance isn’t clear, though. Some players won’t attend even if they are under contract. Top to bottom, it’s really just Wallace hanging onto a reasonable and valid bargaining chip.

It’d be a different story if he was talking about missing training camp, which begins in late July.