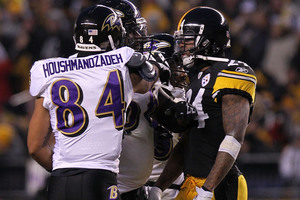 Ya ever have that co-worker who comes in with a look that says “I have a gun and a shovel, and I doubt anyone will miss you, so don’t toy with me today”?

A co-worker who, perhaps, is running a fever, and is royally ticked off at his dog’s escape from his collar and subsequent trek through four inches of wet, heavy snow this morning.

It may not be rational. Or logical. It may be pure insanity, but that’s me today. So I’m going to rant a little. The thought and realistic possibility of the Bengals nabbing WR Mike Wallace away from us with a low-end first round pick just does that to me, and I want answers. Sometimes, Twitter just doesn’t give you enough room to ask the questions needing to be asked. Here’s what I want to know.

How did the Steelers get locked into Salary Cap Jail? This is a team renowned for its front office savvy. A dream team of numbers nerds, Kevin Colbert and Omar Khan, never steered this franchise into such perilous waters.

Are we just blindly loyal to this franchise, so much that we aren’t questioning its leadership right now? I get the fact Colbert walks past six trophies on his way into work, but now, he’s staring at a team salary largely increased last season. Were they gambling heavily on a 2012 salary cap that would have been about a 15 percent increase from this season?

Extensions were given to Ike Taylor (a new deal, actually), LaMarr Woodley, Troy Polamalu and Lawrence Timmons last season. Taylor, Woodley and Timmons were asked to restructure those deals less than a year after they were signed. That’s not standard business practice on the South Side. Did they not see the problems those decisions may bring this year?

Adding to it is RB Rashard Mendenhall’s base salary increase from 2011 to 2012. His cap number went from around $ 800k to $ 1.2 million, and all that factors into the cap. Were they planning on him rushing for fewer than 900 yards?

Since they were in the giving mood last year, why not talk to QB Ben Roethlisberger then about an extension? Clearly, the team has its quarterback. That quarterback’s legacy is winning. He obviously can win here, but since you know (before training camp 2011) his best friend, Bruce Arians, will be the offensive coordinator that season, why not ask him to take a few bucks less in 2012, and in exchange, you’ll tack on another two years, and spread money out from what’s left on his deal then? New money for him, cap savings for the team, and none of this “burn the midnight oil to free up money to sign WR Mike Wallace to a long-term deal” junk.

The upside to that (in a manner of speaking) is they have the exact same scenario with WR Antonio Brown next year. They’re guaranteeing a lot of money to veterans now, it’s reasonable to think some of that is going to have to hit the books next year.

Giving a restricted free agent a franchise tag seems out of the spirit of its purpose, but at the very least they could have seen Wallace having another big season, and really becoming a possible target in the RFA market. Knowing they’d have to franchise him to protect him, why didn’t they talk last year about an extension for Wallace? Maybe they could still have gotten him on the cheap.

The linebacker tag is likely to be $ 1.5 million less in 2012 than the wide receiver tag.

So someone throw a glass of cold water on my face, or toss me a bottle of whiskey a la Delta House’s John “Bluto” Blutarsky, and tell me why we needn’t worry about any of this.