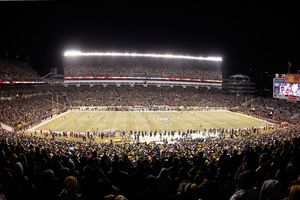 As usual, we’ll dig into a few topics, but the agenda here is pretty open.

It’s Friday afternoon, just a few hours left before you kick off your weekend. We’re turning the conversation dictation to the readers.

Judging by the weather map I’m looking at currently, with most of the country in deep red or even an Arizona-like pink in some areas (Cincinnati), you are likely hotter than the blazes of hell wherever you are.

– Anyone else feel that was the least entertaining NBA Draft in history? Agents are so paranoid now they’re clients are going to say something dumb, they seem to be instructing them to not even listen to the question asked, and just repeat cliches until they have to throw it back up to the play-by-play guys.

So not fun. Not even the ticker on the bottom that listed off fun facts about the players. I remember a foreign guy listing “riding the subway” as what he’s most excited about playing in the NBA. You just can’t make that up.

– I touched on this a little bit in a comment on a story I wrote yesterday, but one of the main things I want to bring to BTSC is a more transparent look into the editorial decisions made here. Granted, it’s not quite as serious as that, but I wanted to share a little insight into what I look for in a story, and how I write it.

Most of what I write is done early in the morning. I get up around 4:15 a.m. (no, not a 4:20 guy), make coffee and refresh my ass groove in my easy chair. Typically, I start by reading over email (a few are from readers, and I accept story ideas, sometimes writing them based heavily on the email exchange I just had with a reader), then I check over the standard news generators – Twitter, fish wraps, mega-sites, etc.

I usually have something of an idea in my head of what I’m going to do, but it’s also spontaneous. If I see something my bosses would think need to be on the site (the NFL announcing late game start times going back to 10 minutes for example), I’ll write it on the spot. This time of the year, though, is about features. A feature story is basically something less timely, maybe a bit longer and involves a bit more color.

In determining the kinds of features I want to write, I think about readers who will be at their desks on that day, bored and looking for something to read. Will they be interested in the same angle I am? Have they heard this a thousand times already? Why is my angle more unique than another site’s? I can’t say I need certain answers to those questions before writing it, and in fact, what I usually do is read over your comments on the past few articles to gauge what kinds of things you’re talking about.

That is a moving target. A quickly moving target, in fact. Personally, I thought my story on Toney Clemons would generate the most traffic. Rainey v. Batch destroyed it (getting linked by both ESPN and Pro Football Talk for some reason). Suppose, in retrospect, I should have seen that coming.

So you’ve got two topical features (the training camp battles), both did well enough where it isn’t a concern (some features are completely bombed), but those are the kinds of things I think about the next few days when I’m preparing the content for the day.

For whatever reason, I thought you might find that interesting.