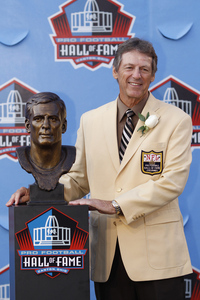 Sorry to be MIA recently. My youngest son, (not the former BTSC mod but the horn player) was married last weekend in Mexico City, and naturally that has kept me away from the computer all too much : ) I haven’t forgotten about BTSC, though. I have rolled up my sleeves and am working on a series comparing players across the AFC North. It will be full of stats and charts and hopefully not too homeristic. It’s taking way too long, as usual, so I thought I would take a few minutes off and share one of my summer reads with you all.

As I noted in the “Annual BTSC “Get to Know Each Other” thread, I’m a relative novice to football fandom. My dad was a keen Cowboys fan during my formative years, but I definitely wasn’t paying attention. I’ve been trying to redress my lamentable ignorance, and have picked up various books from the earlier days of football. “Paper Lion” by George Plimpton caught my eye, and even though it was about the Detroit Lions rather than the Pittsburgh Steelers I picked it up and gave it a go.

Imagine my delight to discover Plimpton spent his summer at training camp during the Dick LeBeau years. There are several stories about LeBeau in the book.

Plimpton described the various ways the players amused themselves in the evenings during camp. Often they would tell stories, particularly if they were waiting for an evening class to begin. These could be about places they had visited, coaches they had known, past training camps, and so on. One evening the stories were about one of the team members, “Night Train” Lane.

Given my ignorance about the earlier days of even Steeler history, it won’t surprise you to hear I had never heard of Lane. I looked him up and discovered what fascinating character he was. For those of you who are equally in the dark, here is a bit of information:

Richard Lane was born in Austin, Texas, and abandoned as an infant. The woman who found him in a dumpster, Ella Lane, took him home and raised him. After a year of junior college he went into the army for a four-year stint, and then went to work in an airplane factory. Apparently he hated his job and went looking for something better. He showed up at the Los Angeles Rams training camp with a scrapbook detailing his high school, junior college, and army football experience and asked for a tryout. The coach, Joe Stydahar, decided to give him a whirl. Lane wanted to play on the offensive line, but he was the wrong size and build, and eventually they tried him as a wide receiver. He was assigned as a tight end, and then Stydahar decided to move him to defensive back. This move created a legend, as Lane set a record for interceptions in a single season (14) which still hasn’t been bested. This is particularly impressive when you realize Lane accomplished this in a twelve-game season. His career total of 68 interceptions is the third highest all-time. [Dick LeBeau’s 62 is seventh all-time.] In 1969 Lane was named the best cornerback of the first fifty years of the NFL. Lane played for the Rams for two years, the Chicago Cardinals for six years, and finished his career in Detroit, playing from 1960-65.

Descriptions of Lane’s play remind me a good deal of Troy Polamalu, actually, except without the now-illegal “head-hunting” tackling Lane used to terrorize opposing offenses. As one of the other players said, “He gambles, but then he recovers it it’s going wrong. That’s what separates him from most cornermen—his natural reflexes. You can’t learn to play like him because he gambles so much. There’s no one like him.”

According to Plimpton, Dick LeBeau was sort of a self-appointed archivist of Night Train stories, and LeBeau described Lane as a theorist and a tactician.

As LeBeau recounted, the year Don Shula was the defensive backs coach for the Lions, Lane used to watch him diagramming plays on the board with increasing agitation. Finally he would get up, go to the board, grab a piece of chalk, and start working away. According to LeBeau, his theories were incomprehensible, and it was like “stepping into another world” when you tried to listen to him. “He’s all the time talking about ‘angles’—angles between him and the pass-receivers, and also between him and his defensive teammates, Gary Lowe, and [Bruce] Maher, and me, and the rest of the secondary.” I particularly enjoyed this comment by LeBeau:

“When the offense comes out of its huddle and takes up a formation, often Train calls out, ‘What sort of setup we got heah?’ reflecting on it, like he had something spread out on a newspaper to look at. Then his mind begins to go to work, and that’s when you can get into trouble if you listen. One time he calls across to me: ‘Dickie-bird, on this play fuss with a zone defense over theah and over heah I’ll play a man-to-man.’ I yell at him he’s crazy, plumb crazy, and he calls back: ‘Mix ‘em up, Dickie-bird, confuse ‘em!’”

Plimpton described Dick LeBeau as a favorite target for the pranks the other players liked to pull, because of an “abstracted air which made it possible for the jokesters to work around him, setting up their props, without his being aware.” LeBeau liked to play the guitar and sing, and Plimpton said he had “a pronounced Mid-Western twang, nasal and slow, which made the songs he put to his guitar quite incomprehensible, though fetching: gentle songs full of melancholy and poverty, one supposed, and love unrequited.”

He also discussed LeBeau’s “ladykiller” reputation, and how he danced with “an aloofness close to disdain, which made the girl moving opposite him, invariably pretty, work very hard, although in the manner of those dances he never looked at her, staring out to one side, then the other, then over the girl’s head…”

Since Plimpton was “masquerading” as a fourth-string quarterback (the players figured out the ruse by the end of the first week) most of the book concerns the offense more than the defense, although Plimpton did get a quick lesson from Night Train and before attempting to play corner in a scrimmage. (He was hopeless, of course.) The book is quite entertaining, and if you have a chance, there are far worse ways to while away the long days before Training Camp starts than a visit to the Lions’ training camp in 1963.

(Editor’s note: ‘Paper Lion’ is to sports journalism as Mean Joe Greene is to football. As Freebird is to Rock ‘n Roll. You won’t talk about any of those subjects for long without each of them coming up. Quite literally the ‘Fear and Loathing in Las Vegas’ of the trade, except, as few people like to believe, Thompson ripped Plimpton’s originality, but made a bunch of stuff up because he couldn’t make the story compelling enough on its own. Plimpton could, and did. It re-branded journalism to be far more inclusive than the nuts-and-bolts style it had been to that point. The first-person accounts had been saved largely for war, Plimpton made it both serious and humorous, letting all of us armchair quarterbacks see how truly difficult it was for the pros who compete ever day. One of my favorite feature stories of all time was me playing the women’s basketball Division II National Player of the Year in a game of 1-on-1, an idea based almost entirely on this book. Yes, I lost. And yes, smartie, I did score. Once. A heave-and-pray from the top of the key)