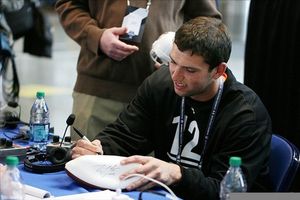 The excitement of the 2012 NFL Draft never was in the top pick. Maybe that’s the reason the Indianapolis Colts confirmed the first overall choice will be Stanford QB Andrew Luck.

There’s no rule that says the first pick has to wait until the commissioner announces everyone is waiting on their pick. Logically, that means they could skip right over it, move onto No. 2 and save 10 or so minutes at the end of the draft, right?

Oh wait, they put it on prime time for a reason.

Depending on how the NFL marketing machine sold advertising space for the 3-hour long celebration to the end of (alleged) amateurism, the highest-selling commercial slots are most likely at the beginning of the broadcast. Not so much right before the first pick, but the first commercial break they have.

The lack of intrigue with the top pick in recent years has probably deadened the value of the ad dollar in this event a little bit. It won’t help any more that everyone knows Washington will select Baylor QB Robert Griffin III with pick No. 2.

It’s not quite as much a sure thing as the first two picks, but Minnesota taking anyone other than USC LT Matt Kalil at No. 3 would be a shock. So with 10 minutes slotted for each pick, and one team having already confirmed the top pick, and another likely to use their 10 minutes to soak up some spotlight, the Vikings will go on the clock at approximately 8:11 p.m. ET. Call it 8:16 p.m. ET when they make their pick, putting Cleveland in the spotlight.

I’m sure most of us will skip over that part, although watching their season “highlights” from 2011 would be entertainment for everyone but Browns fans. The point is, we’re looking at probably another two hours from there until Pittsburgh is up.

See? It really is hard trying to come up with a new angle for the Andrew Luck No. 1 pick story. But I pulled it off.