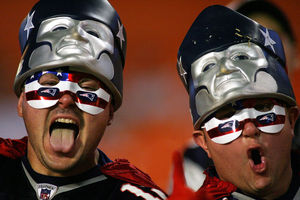 Thanks go to VinnySteel for completing his two-part turn in the mind of Bill Belichick and graciously allowing me to intrude upon his vacation. Now there’s just one pick left to go! Last up: the Super Bowl Champion New York Giants and they’ll be represented by Pittsblitz56.

So, here we go again… just when I thought I was done – they pull me back in! … like Bill Parcells. (Almost.)

But this pick is really about another Bill – a Parcells disciple who has far exceeded his one-time mentor. Mr. Belichick, of course, has built much of his success through the draft, a point well emphasized by Rebecca Rollett in her piece a couple of days ago about Kevin Colbert’s prowess in doing the same. Unlike the Steelers however, he has become famous for wheeling and dealing considerably, having traded down or out of the first round in each of the last five drafts – including doing so twice each in both 2009 and 2010.

As such, there’s much speculation and maybe it’s even a foregone conclusion that this pick at this point will likely not happen for the New England Patriots. Most New England bloggers and fans out there seem to think they will attempt to trade their second 1st round pick to a pick-needy team for a first round pick in 2013, thus setting them up with the option to repeat the process for yet another year. A partner that seems to be mentioned more than once when considering this scenario is Jacksonville. Year to year, who knows what Belichick will do? He’s traded out and then back into the first round in the same draft, for goodness sakes!

As such, there feels like more of a “poetic license”, if you will, with this pick. If it’s unlikely to be made, then the options of what would be done with it become much more wide. It isn’t a throw off – and the Patriots could stun the world and actually use both of them – but regardless, it definitely becomes completely a “best player available” scenario as it feels almost like a “bonus” pick. So this time around, I felt there were lots of options:

Janoris Jenkins – In this case, he’s definitely among the BPA, and New England has taken troubled players down the straight and narrow before (see: Randy Moss). But taking a first round risk on a guy with that many red flags is likely a little too much. Plus, he still hasn’t done anything in the NFL. Moss was proven when he came to the Patriots.

Vontaze Burfict – See Janoris Jenkins, above. Plus, he might be crazy.

There are several offensive line prospects left at this point, but I just feel the Patriots already prepared well for Matt Light’s retirement. Switching Nate Solder to the other side and moving Marcus Cannon with Sebastian Vollmer coming back on board gives them a bevy of high picks on the line as it is. I don’t believe they would be open to drafting a lineman here unless he was extraordinary, and I don’t feel any of those that are left really are.

So I went with something of a surprise…

With the 31st pick in the 2012 draft, the New England Patriots select Coby Fleener, TE, Stanford.

Okay – so forget all that stuff I said about defense in my last pick. Belichick doesn’t care. He breaks convention faster than FBI agents at the Hotel Caribe and has only slightly better scruples.

And yes, they already have two incredible tight ends. But Fleener is 6’6″, 247 and runs a 4.46-4.57. He’s virtually a wide receiver anyway. His best routes are the deep seams and he exploited them well as evidenced by his just under twenty yards per reception last season (19.62). He had 34 of those receptions for 667 yards and ten touchdowns last year. Teams will shy away from him because he had the ankle injury – sort of like what happened with Heath Miller when he fell to us. But Fleener is faster than Miller and just as good a blocker as Miller was when he came out of college.

Yes, defense makes sense here too. But if you think about it, if the Patriots had a third incredible tight end – not only would they have scored even more points last year, they also would not have missed a healthy Gronk as much as they did in the Super Bowl. If Courtney Upshaw produces for them in the pass rush on defense, then just one more ridiculously impossible to cover option for Tom Brady might just be too much for the rest of the NFL to over come. Even when considering the whooping that we put on them – would Keenan Lewis or Cortez Allen or any of our cornerbacks handled him as easily as they did Deion Branch? Would it have changed the outcome of that game? Would the AFC Championship had been as close, considering Baltimore didn’t exactly have a stellar secondary? With another touchdown on the board, Brady is fully in clock-killing mode by the 4th quarter and a player like Fleener could be the kind of player to make something like that happen.

Plus, Fleener is intelligent and will adjust and easily learn the crazy wrinkles that three high-caliber tight ends could produce.

Bottom line is if Belichick were forced to make this pick, he’d want to be certain he was upgrading the team. Fleener definitely would not be there at their next pick, and Belichick absolutely elevates his team by nabbing him here. If he stays healthy and the Patriots are able to be as creative as his potential allows them to be, they may (for the time being) kill the theory that “defense wins championships”, much to the chilled chagrin of true Steelers fans.