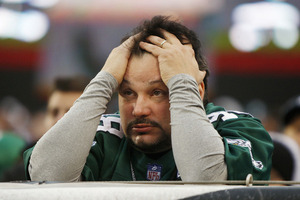 Back-to-back players from ‘Bama come off the board! And many thanks go to LV Steelers Fan for the analysis of the cross-state “Dream Team”. Next up: New York Jets and they’ll be represented by steelers1963.

OK, I’ll admit it. I have a soft spot for the Philadelphia Eagles. Maybe it’s because I was forced to watch them every Sunday growing up in Allentown, one hour away from Lincoln Financial Field. Or more likely, it’s because of the infinite joy they provided me as they caused their fans(i.e. most of my friends) to go through an all-too-predictable roller coaster of emotion each and every year. Before every season, expectations were sky high. This was going to be the year that the Birds finally broke through and ended their 50 year championship drought. Then they would stumble out of the gate and everyone would jump off the bandwagon saying “Same old Eagles” while calling for Andy Reid to be fired and Donovan McNabb to be benched and/or traded. But come November, a magical turnaround would capture the imagination of the Birds’ long-suffering fans, and their Super Bowl plans would be back online. Until, that is, the Eagles would lose a game in which they were heavily favored either in the last few weeks of the season or in the playoffs, and my friends would go into spiraling paroxysms of rage and despair. “I knew this would happen all along, this %$ #^@& team never changes!”

Because of this, I was completely unsurprised when the self-proclaimed “Dream Team” had its dramatic flameout last fall. Time after time, the Eagles had their foe on the verge of defeat, only to have their defense collapse and allow a late game-winning score or 4th down conversion. Atlanta, New York, San Francisco, Buffalo, Chicago and Arizona all escaped the Eagles’ clutches early in the season, and by the time they started looking like the team most had expected to see all year, it was too late.

Defense thus has been expected to be the Eagles’ focus in the 2012 draft, and the injury to All-Pro LT Jason Peters doesn’t figure to change that thanks to the recent signing of Demetress Bell (who had been going by Demetrius Bell until very recently). Boston College linebacker Luke Kuechly was the trendy pick for Philly in practically every mock draft early in the offseason, but their trade with Houston for MLB DeMeco Ryans has given the Birds some flexibility at #15.

Outside linebacker is a definite need for Philly, and both Courtney Upshaw and Zach Brown should be available at their first pick. Defensive tackle is also an interesting possibility, as picking up a Fletcher Cox or Michael Brockers could give the Eagles a fearsome defensive front when combined with Jason Babin, Trent Cole, Derek Landri and Cullen Jenkins. Where the Eagles could really use defensive help, however, is in the secondary, and more specifically at safety. 2010 draft pick Nate Allen has done a creditable job there in his first two seasons, but injuries have been a major problem. The Eagles drafted Jaiquawn Jarrett to play next to him in 2011, and the jury is still out on the Temple product. Getting a stud safety to play next to Asomugha and DRC in the secondary would go a long way towards putting the Eagles’ defensive debacles from last season firmly in the past. For this reason…

The Philadelphia Eagles selection in the 2012 BTSC Community Mock Draft is Mark Barron, safety, from Alabama.

Barron was a three-year starter for the Crimson Tide who also played in every game during his freshman campaign, proving himself in the process to be an extremely tough and durable player. He is currently recovering from a double-hernia operation following Alabama’s national championship season, and characterized himself as 80-90% at his pro day in late March. His size is superb at 6’1″ and 213 pounds, and while his speed is merely adequate for an NFL safety, he runs well. Barron uses his size to his advantage, and has developed into a hard hitter who can still be counted upon to make the tackle after delivering a blow. Not surprisingly, his strength as a safety is his ability to line up inside the box and play the run like a linebacker. This would make him an excellent complement to Nate Allen (assuming Allen can stay healthy), who is known more for his coverage abilities.

Barron’s pass defense skills should not be underestimated, however. He intercepted 12 passes in his three years as a starter and has a knack for reading the quarterback’s eyes and keeping plays in front of him. He demonstrated good jamming and press coverage skills at Alabama, especially against slot receivers, and proved himself to be intelligent, hard-working, and a student of the game in the film room. Barron has no character concerns, although he was arrested a year ago for a misdemeanor stemming from a car accident in his hometown of Mobile, AL.

All in all, Barron appears to be a great fit for the Eagles. The Birds need safety help and he brings a toughness that has been lacking on the defensive side of the ball in Philly since Brian Dawkins and Jeremiah Trotter were released several years ago. To be a great team in 2012, Philadelphia does not need a great defense. They merely require one that can hold on to leads late in games. Had they done that last year they would have gone 14-2 even with all of their other problems – such as the inability of Michael Vick to remain healthy. Drafting Barron could be exactly what the Eagles and their long-suffering fans need to finally break through and win the city’s first NFL championship since 1960.